“Terpenes, or terpenoids, are the compounds in cannabis that give the plant its unique fragrance. THC and the other cannabinoids have no odor, so marijuana’s compelling fragrance depends on which terpenes predominate. It’s the combination of terpenoids and THC that endows each strain with a specific psychoactive flavor.” Martin Lee

Artificial lighting pales in comparison to the power of the Sun. Using natural light allows Cannabis to grow as it has for thousands of years. The intensity and full spectrum of sunlight enables a rich expression of Terpenes and Cannabinoids to fully mature in each of our strains. Intense light from the sun evenly penetrates through the plant canopy, allowing the entire plant to fully develop. This is not possible with indoor grow lights alone.

If you walk into a garden 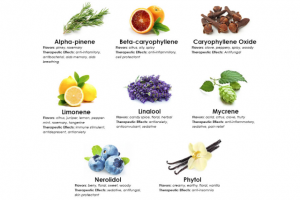 in bloom and breathe deeply, you are likely to encounter great smells. In many cases, the molecules that bring those scents to your nose are terpenes. Terpenes are a class of molecules that typically contain either ten or fifteen carbon atoms built from a five-carbon building block called isoprene. It is important to note these molecules are volatile —they tend to evaporate relatively easily—which allows them to reach one’s nose and trigger the olfactory senses.

Because they share the common building block of isoprene, terpenes can be categorized based on how many terpene units they include. The “base” of this system is a two-isoprene unit, so monoterpenes have ten carbons. This category includes molecules such as camphor, menthol, and pinene. If three isoprenes are present, as in farnesol, the category is called sesquiterpenes.

In plants, terpenes are typically found as a component of the essential oils. The name of this fluid suggests an important characteristic of this class of molecules. If humans have found these oils important enough to refer to them as essential, there is a reasonable chance that they have useful properties.