Cannabinoids have an extensive history dating back thousands of years, and currently there are thousands of peer-reviewed scientific publications that document the underlying biochemical pathways that cannabinoids modulate. The endocannabinoid system possessed by all vertebrates regulates all body systems and maintains homeostasis. As such, the mechanisms of phytocannabinoids’ biological impact are multidimensional.

The dawn of cannabinoid science….

Despite the medicinal and recreational use of Cannabis for centuries, the identity of its main psychotropic constituent remained unknown until 1964 when Raphael Mechoulam, Yechiel Gaoni, and Habib Edery from the Weizmann Institute of Science in Rehovot, Israel, isolated and synthesised tetrahydrocannabinol (THC). It was subsequently established that this compound is responsible for the psychotropic effects of the plant, one early hypothesis being that since THC is so hydrophobic it induces these effects by interacting with cell membrane lipids. However as more was learnt about the pharmacology of THC and of synthetic cannabinoids such as CP55940 that induce THC-like effects it became increasingly likely that these effects must be mediated by a distinct family of receptors.

The discovery of cannabinoid receptors….

It was not until 1988 during experiments using radiolabelled CP55940 that the first of these receptors was actually identified. Aptly named cannabinoid receptor type 1 (CB1) it was located at the synapses of the central nervous system and importantly, the peripheral terminals of sensory neurones. CB1 receptors are thought to be the most widely expressed G protein-coupled receptors in the brain but are also found in peripheral tissues including peripheral nerves and non-neuronal tissues such as muscle, liver and fat. A few years later a second receptor (CB2) was identified through homology cloning. This is predominantly expressed in the cells of the immune system.

A receptor requires a ligand…

The discovery of cannabinoid receptors prompted the hypothesis that the body must produce one or more endogenous ligands (naturally occurring molecules) that bind to the receptor. Evidence also emerged that the endocannabinoid system (EC) is transiently activated under certain stressful conditions to restore homeostasis.

The EC system is found in many areas of the brain, which explains why it affects so many different body functions. Cannabinoids exert their influence by regulating how cells communicate—how they send, receive, or process messages. 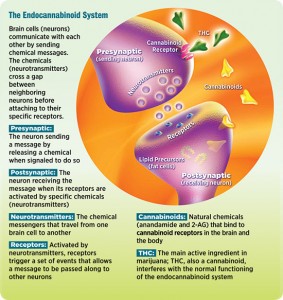 Brain cells (neurons) communicate with each other and with the rest of the body by sending chemical “messages.” These messages help coordinate and regulate everything we feel, think, and do. Typically, the chemicals (called neurotransmitters) are released from a neuron (a presynaptic cell), travel across a small gap (the synapse), and then attach to specific receptors located on a nearby neuron (postsynaptic cell). This spurs the receiving neuron into action, triggering a set of events that allows the message to be passed along.

But the EC system communicates its messages in a different way because it works “backward.” When the postsynaptic neuron is activated, cannabinoids (chemical messengers of the EC system) are made “on demand” from lipid precursors (fat cells) already present in the neuron. Then they are released from that cell and travel backward to the presynaptic neuron, where they attach to cannabinoid receptors.

Since cannabinoids act on presynaptic cells, they can control what happens next when these cells are activated. In general, cannabinoids function like a “dimmer switch” for presynaptic neurons, limiting the amount of neurotransmitter (e.g., dopamine) that gets released, which in turn affects how messages are sent, received, and processed by the cell.

Some applications of cannabinoids have been well established in peer-reviewed literature such as alleviating nausea and stimulating the appetite for people with AIDS and Cancer. Other well-known uses include easing chronic pain and reducing muscle spasms associated with neuromuscular disorders like MS and spinal cord injuries. Some current uses are poorly understood, such as its perceived effectiveness in alleviating certain autoimmune disorders, such as Crohn’s Disease.

Even today, new uses for cannabinoids are constantly discovered and as there are more freedoms allowed to explore this unique phyto-medicine, more will be revealed! To date hundreds of natural constituents covering several chemical classes have been isolated and identified from the Cannabis plant.

SOME KEY PHYTOCANNABINOIDS ARE:

These cannabinoids belong to the chemical class of terpenophenolics, of which 85 have been uniquely identified in cannabis, including the most psychoactive cannabinoid, THC.